The Trailer Behind "Danny Daycare"

We never expected the Singletrailer to fly so high 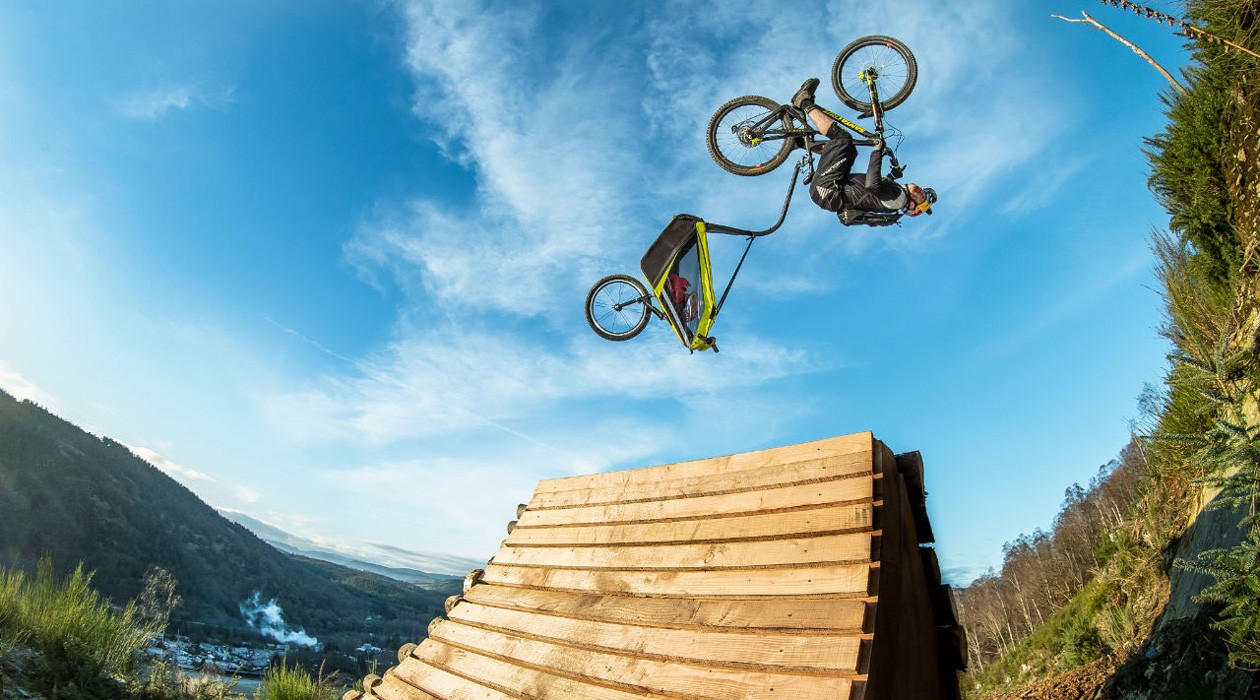 Nobody knew it at the time, Danny Daycare started back in 2016 when Stu Thomson, founder of Cut Media, purchased a Singletrailer from Elevation Cycles in Linlithgow, near Edenburough in Scotland. Singletrailer was originally just a way to spend more time mountain biking around his hometown of Aberfoyle, outside of Glasgow, with his then two-year-old daughter Daisy and his wife Amber. After spending some time with the trailer in tow Stu realized it could handle some pretty rugged terrain. In his job as founder and filmmaker with Cut Media, Stu had worked with legendary trials rider Danny MacAskill on some of the most watched cycling videos on the internet - Imaginate, The Ridge, and Wee Day Out to name a few. So the question came about: What would happen if you hooked up Danny MacAskill with a Singletrailer? The proverbial gears started turning, and the pair started to play around and see just what kind of cool stunts Danny could pull off with the Singletrailer behind him. And so the idea for "Danny Daycare" was born. 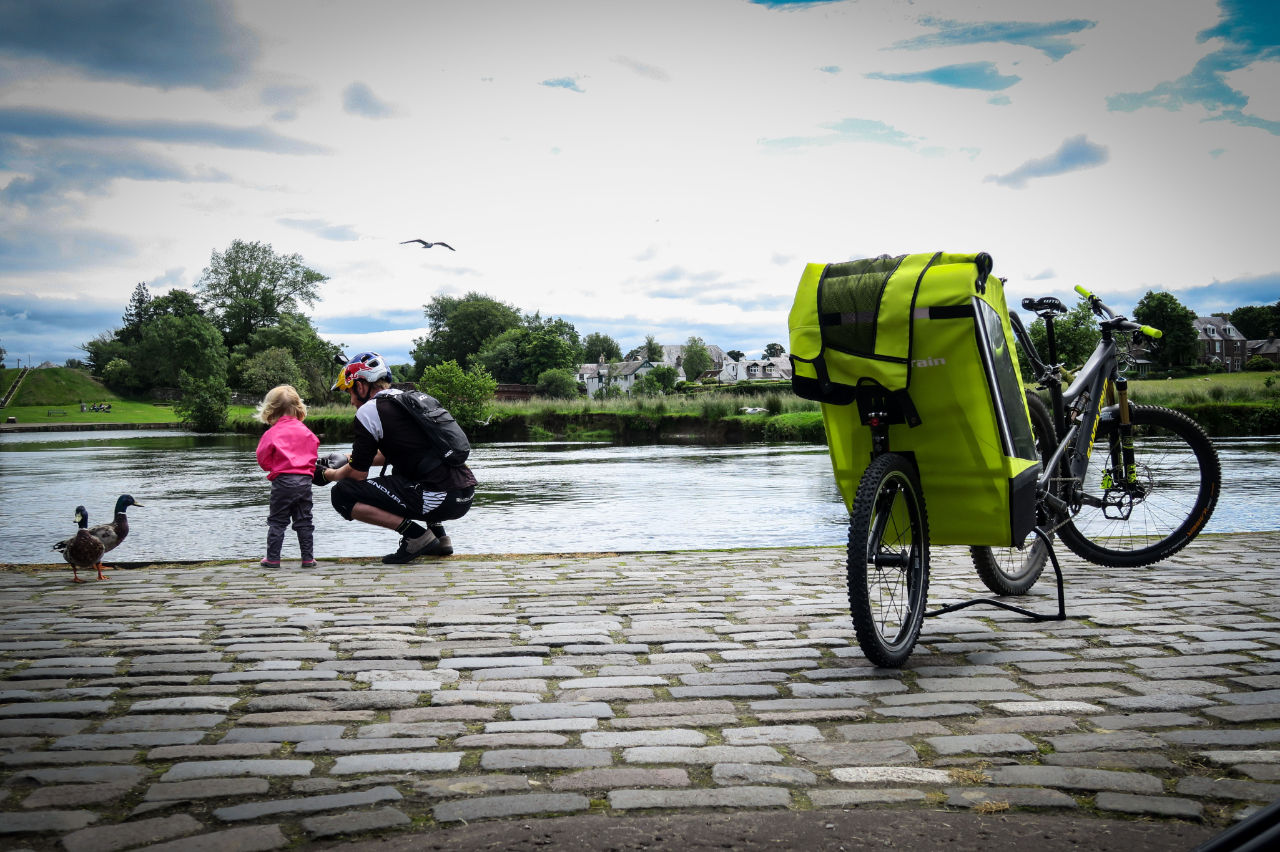 Cut Media approached us in the spring of 2017 with a request for a Singletrailer - while Stu already had his own, they needed one for filming stunts with Danny and the "Daisy Doll" – spoiler alert, the doll was a substitute for the real Daisy when things got rough. This was a cool moment for marketing team at Tout Terrain - when "Danny Mac" knocks at our door looking for some product in-kind you are only too glad to help. We all realized that this could be huge for us - what an opportunity to have a big name interested in riding with one of our flagship products! There was a lot of buzz around the workshop. Our staff even includes some talented trials riders (including ex-pro Felix Mücke) so there was a lot of excitement growing around the lunch room at the possibility of a film. After we sent the first Singletrailer, the months rolled by and as the summer started to wind down, we hadn't heard much from Cut Media or Stu. Was the project dead? What would become of our trailer?

Danny Daycare Was a Passion Project

It turns out that the project had snowballed into something much bigger than anticipated. What started as a “wee bit of fun” with Daisy in the Singletrailer was starting to grow. The locations, stunts and logistics grew into a full-on production, but this was still a passion project for Stu, Danny and the team, and they worked diligently to film scenes between Danny's regular gigs. In the fall of 2017, shortly after Eurobike, Danny broke his kneecap which put him out of commission for a few months. Meanwhile, Daisy, the star of the film, kept on growing and even the Singletrailer had gotten a bit of an update. It would be early 2018 before year Danny would get a chance to work on the film again. It was then I picked up the project and started to check in with Cut Media sporadically to see how things were going.

In July of 2018 while I was at Eurobike that I saw Danny in the lobby taking selfies with some fans. It was completely spontaneous, but I quickly ran downstairs from the foyer to see if I could get an update from the man himself. I couldn't help be just a tad nervous introducing myself to one of the biggest names in cycling. We chatted a bit about the Singletrailer and had a good laugh as he described some of the crazy stunts they had already filmed. He said he was impressed with the durability and the abuse it had taken, which was really great to hear. He also described how riding with the Singletrailer changed the handling dynamics of his bike and presented him with a new riding challenges that he had not experienced before. 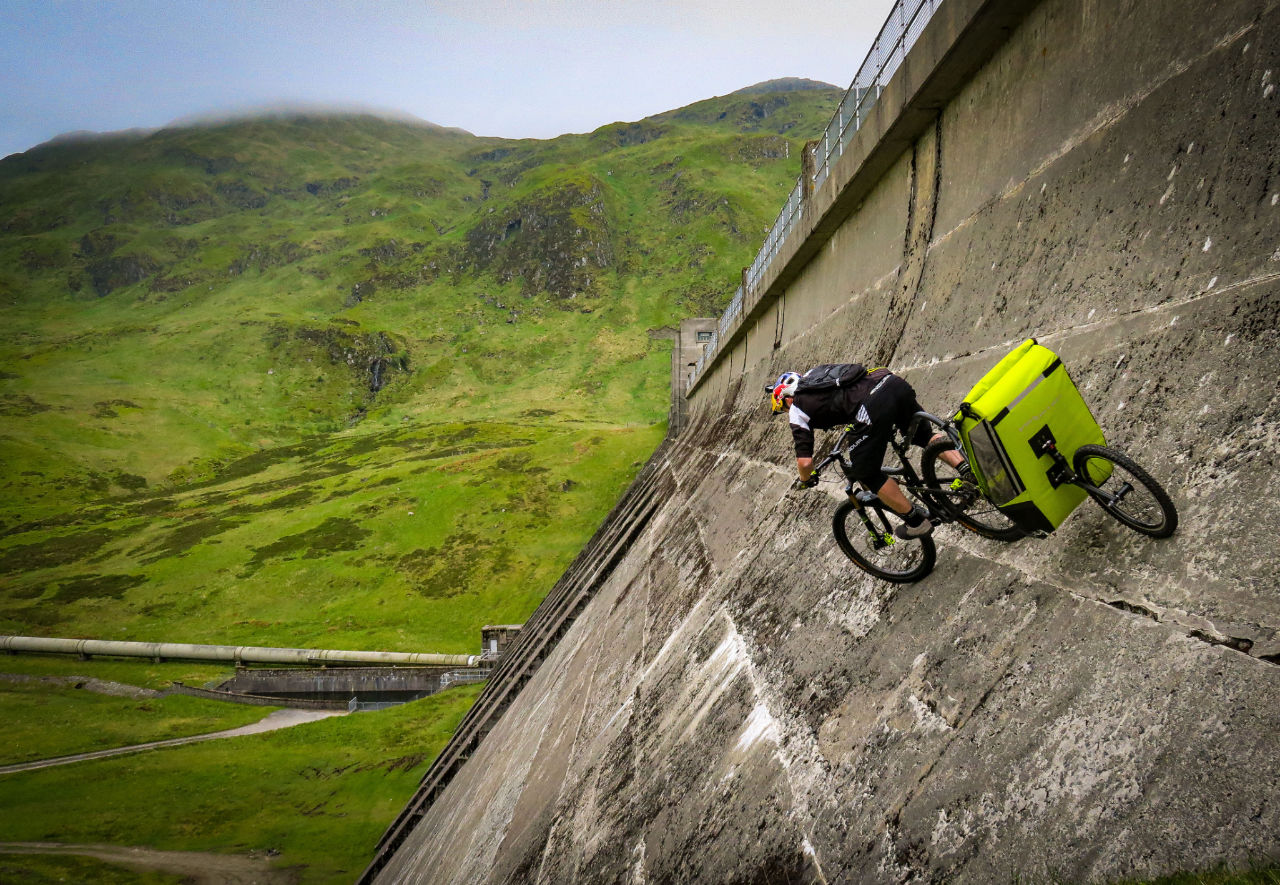 It was then he let the cat out of the bag - they had pretty much finished filming and editing, but there was just one stunt left to complete: a corkscrew flip with the trailer attached. "This is going to be epic," I thought to myself. I asked him if they had come up with title for the film...Danny smiled sheepishly and said he couldn't divulge it, but that it was “very appropriate”. We would just have to wait like everyone else!

With Eurobike done and dusted, I was excited to tell the team back at Tout Terrain. I had to finish packing up the company van, so maintaining my composure as an industry professional, I passed on the opportunity to ask Danny for a selfie as I had seen a dozen or so others do before. I realize now in retrospect that that this was a clear dereliction of my duty as a member of the marketing at Tout Terrain, but I can honestly say it was just happy to meet him - he is as personable and down-to-earth as in his films. I bet if I had offered, he would have hung out and shared an ice-cream. 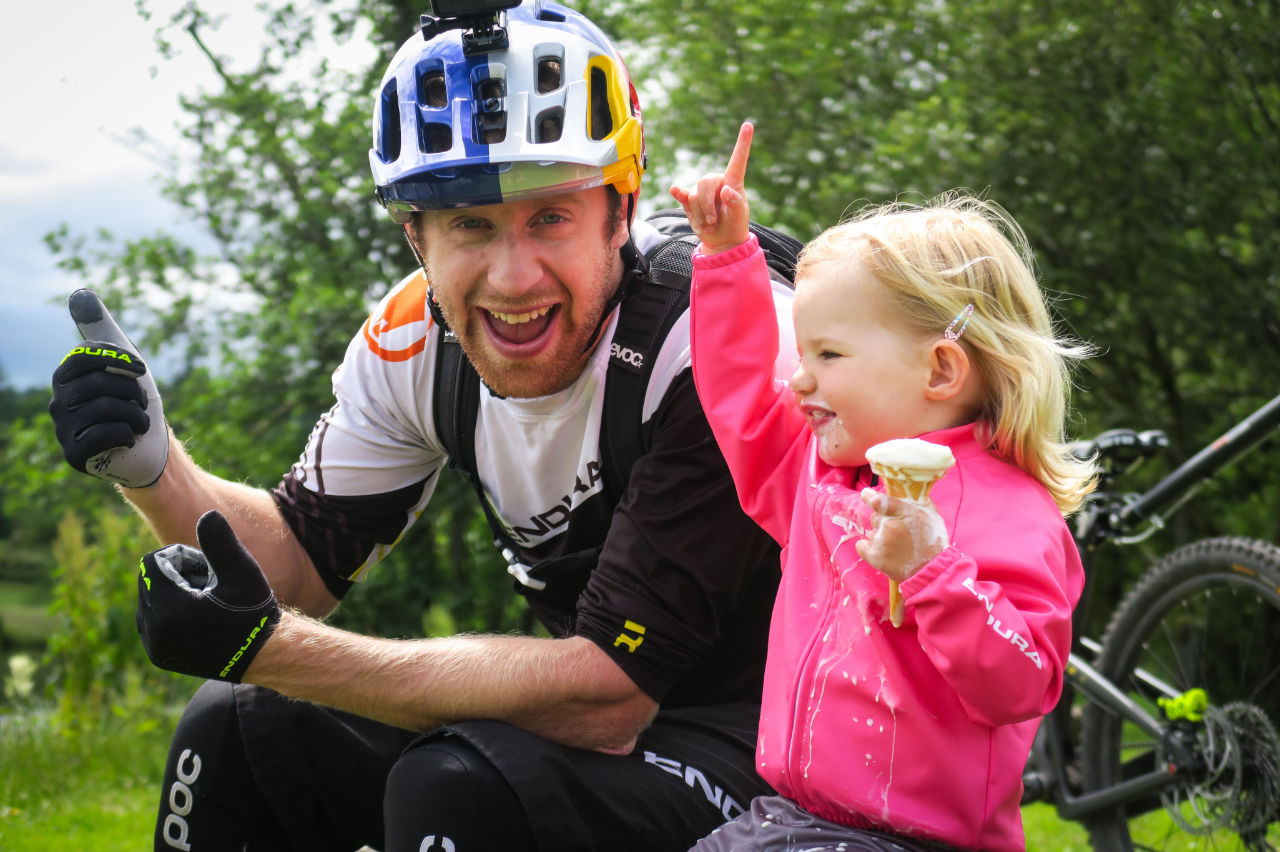 A few weeks later, I got an email from Katie at Cut Media asking for a replacement Singletrailer - the first one had finally given up after an incident in the foam pit. We sent it out right away and crossed our fingers. A bit more time went by when Stu followed up again: "Danny asked what the potential would be to have a few spare Singletrailers as he’s a bit concerned about breaking ours during filming and then not being able to carry on. He’s more than happy to pay for them, or perhaps if you sent them we could pay if they are used or just return them if they aren’t used." This was understandable, what with the planned barrel roll and all. With the stunts they were pulling, we were just glad they hadn't broken Danny so far! 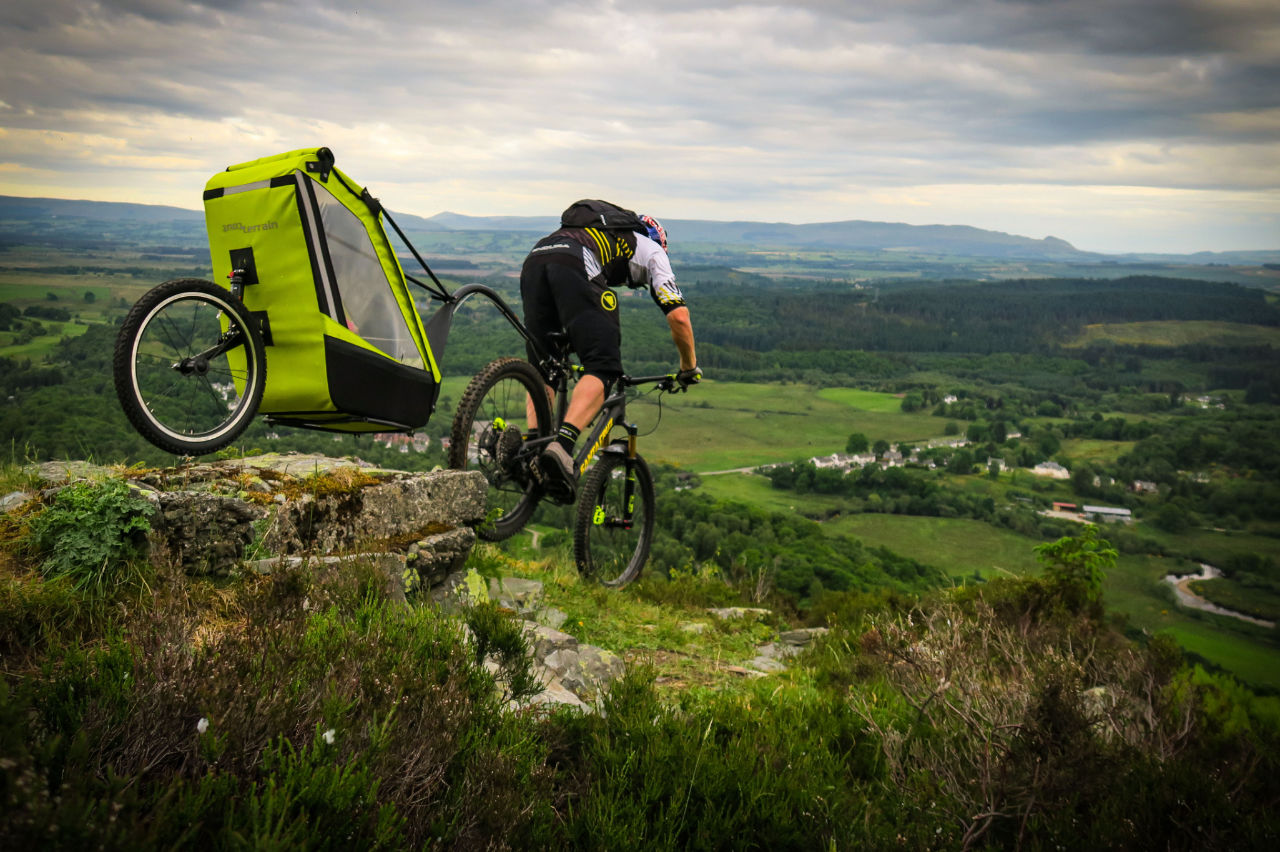 In reality, it had been so long since production had started that we had almost run out of Singletrailers of the same colours and components - we sent out the last three matching Singletrailers (bringing the total to five, if you are still counting). With the spare Singletrailers on hand, the production team could be confident they could finish the shoot without concern for running out. Stu thanked us for the support, and promised us that the results would be worth it. With everything in place, Danny and Cut Media shot the final scene, finished the edit, planned the launch on Danny's new Youtube channel...and the rest is history:

It has been three days since the launch of the film, and at the time of writing, the video had topped out at Number 4 on Youtube's trending video (behind Madonna's Eurovision performance and an Avengers parody video…yikes!), and currently has over two million views. By the time you read this, I imagine that number of views will have increased significantly. As a digital marketing manager, it is interesting to reflect on this whole process. When I chatted with Stu about the film early on, he was clear that this was a true passion project and they did not want to compromise the vision and the story for commercial gain - none of us wanted it to become a Singletrailer commercial.

In truth, we never really asked to be part of the video. In fact, Tout Terrain branding on the Singletrailer is so understated that our logo barely shows up! But then again, aside from a few cheeky product shots from Danny’s official sponsors (Endura, Five Ten, Santa Cruz, Red Bull, POC…the list goes on) it’s all about the story...and as a viewer, I have to admit I like it that way. Sure he is riding with the Singletrailer, but ultimately this it is a tale about Daisy and Danny, and the simple joys of riding bikes and spending time with friends and family, which is what Tout Terrain is all about. 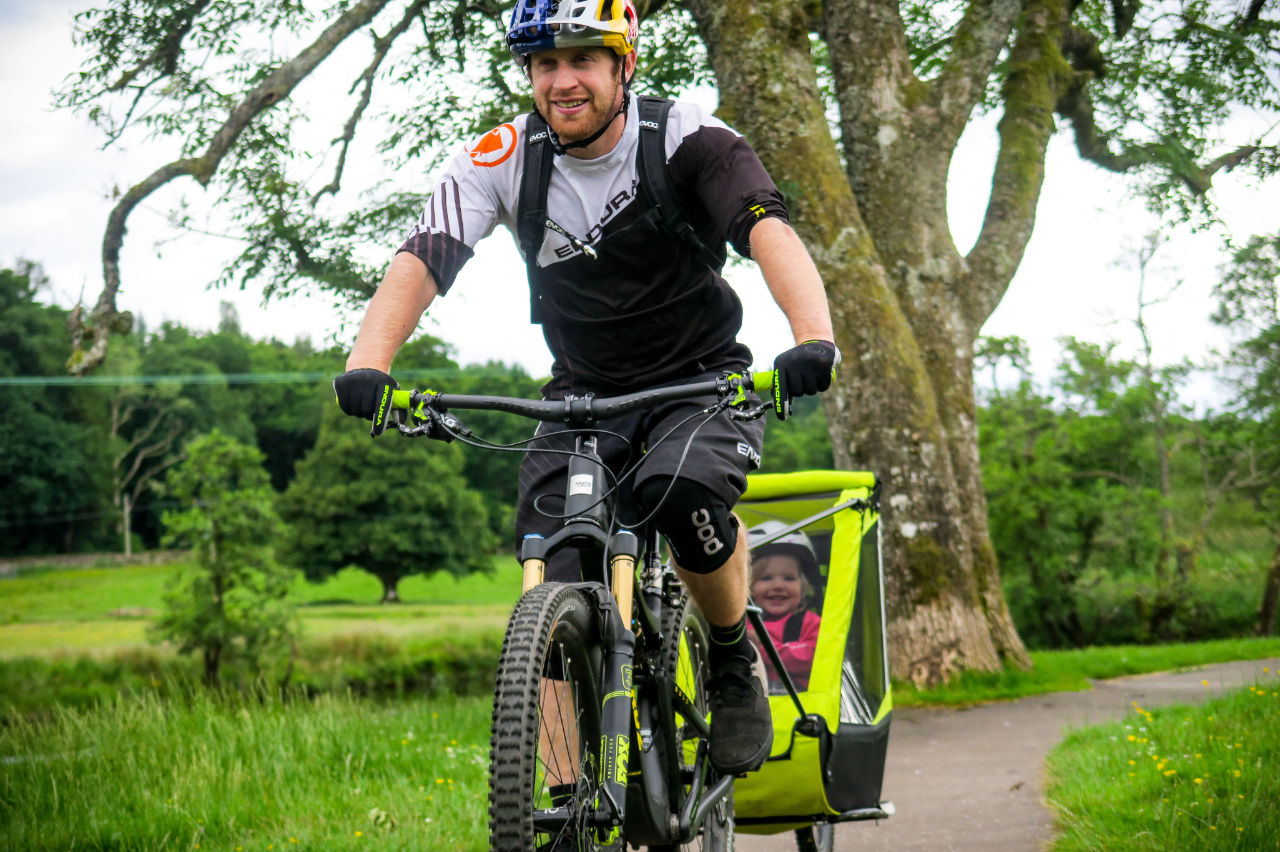 And despite funding the project out of their own pockets, Danny, Stu or Cut Media never asked us, or any of their other sponsors for a cent...as you read, they even offered to pay for our Singletrailers. In a way, this video exposes perhaps the biggest challenge in the world of online marketing. In this day and age it is never quite clear where truth and storytelling end and sponsorship begins. The paradox (and the risk) is that the more branding you show, the less authentic your story becomes. In the best cases, great products just speak for themselves. In the cycling industry we ask our sponsored riders and social media influencers to ride a fine line between promoting the products we provide, and having them telling their own stories and their simple truths.

While “Danny Daycare” is Stu's truth, this little story is ours. We are just proud to have played a small part in a positive, uplifting and entertaining film that is destined to become an online classic. In the coming days and weeks as Daisy and Danny are downloaded into living rooms and cell phones, hands and hearts of adoring fans, we will be working with Danny and Cut Media to auction off an extra trailer from the shoot and donate the funds to a good cause. If you have any suggestions for a worthwhile registered charity that supports children and family cycling, feel free to email your suggestions to us at info@tout-terrain.de 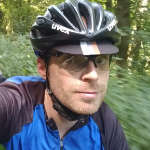 Experienced & written by Damian Bradley #Inside